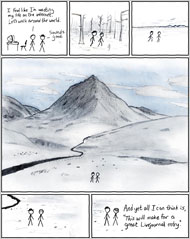 A nice writeup of Randall Monroe and his webcomic xkcd in the NYTimes Media & Advertising section:

Mr. Munroe is clearly still getting used to his celebrity and to running a business. He and his roommate, Derek Radtke, work on the Web site out of their Somerville, Mass., apartment, and they recently hired an employee to handle e-mail.

“People are generally surprised that we make a living from it,” Mr. Munroe said. Without being specific, he said that the sales of xkcd merchandise support the two of them “reasonably well.” He said they sell thousands of T-shirts a month, either of panels from his strip or in their style, as well as posters.